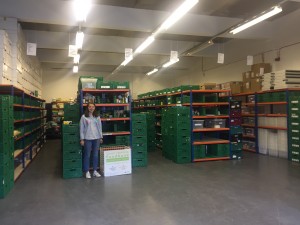 My name is Lily and I am 16 years old, living in South West London and until this summer I had never experienced the reality of poverty in the United Kingdom.  This summer I spent a week at the First Love Foundation and have learnt some of the most valuable life lessons. I have been instilled with a   great sense of social responsibility to the most vulnerable members of our society. Having lived in the UK for most of my life I felt poverty was a thing of  the past in a developed first world country. However, I couldn’t be more wrong. Throughout my time at the foundation I got involved with both helping  individuals and also the larger outreaches of the charity. The foundation is de-stigmatising modern poverty; and helping the Government and commercial companies realise that poverty is still highly relevant in the 21st century.

On Monday I helped at a session of ‘Love Summer’ which is a programme to help families that struggle to feed their children during the holidays without free school meals. On average during the summer holidays families have to spend an extra £30 per week to feed their children. The morning was spent serving coffees and teas to parents, while their children played in brightly coloured soft mats and created arts and crafts. The children were also introduced to the game of baseball, thanks to a team from London Sports CIO, who gave their times to teach the children how to play the game. It was really fun and the laughter became contagious! It was great to see children who were initially unwilling to try something new get involved and enjoy themselves, despite a lack of confidence.

Additionally, both children and parents had an engaging activity about the importance of healthy eating. This was a great way to excite the children about eating fruit and vegetables, while showing their parents how easy it is to make healthy after-school snacks (while on a limited income). Then we all headed to lunch, where volunteers and customers ate together. This created a relaxed and informal environment; allowing parents to freely express themselves and seek advice about any struggles they are facing. The children also had the opportunity to get back to school haircuts. The session was amazing and it was lovely seeing the strong friendships between everyone. It was a perfect example of how First Love is transcending social and cultural barriers to bring people together. One mother said “[she] can’t wait to come back on Thursday!”

Spending time in the office…

The rest of the week was spent in the First Love Foundation offices with the team. I was lucky enough to have a formal induction about the aims and achievements of the Foundation. It was incredibly inspiring seeing the positive change the foundation is creating in Tower Hamlets, despite the increasing societal pressures. I was also given a tour of both Poplar and Canary Wharf which revealed to me the massive contrast between the two areas. I was quite shocked at the difference between the two places, it became quite apparent that the people working in Canary Wharf often had very little knowledge about the deprivation in the rest of the borough. My tours gave me vital context about the work of First Love, as they try and inform large companies about the hardships people face. Poplar was also extremely interesting, there is a large variety of architecture from 1960s council housing to the remains of 19th century buildings. This emphasised the historical importance of Tower Hamlets and its immense contribution to London’s culture.

I was also able to join the team in their meetings throughout the week. I was particularly interested in the meeting with the advertising agency, Mullen Lowe, who are creating a short video for First Love to help enlighten people about the reality of hidden poverty in London. I really enjoyed seeing the complex thought process behind the message of the video. The vid 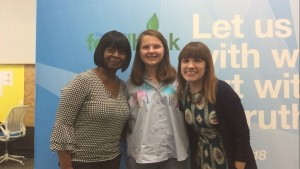 eo is trying to remove the traditional archetype of poverty, and reintroduce a modern concept of crisis and its ability to affect anyone. Additionally, the meeting also gave me a greater awareness of the importance of balancing philanthropy and business. Another meeting I was involved in was discussing the future of the First Love website. It is interesting seeing the methods used to engage the public and educate them about the crises often faced in Tower Hamlets.

On my final day I also went for a quick visit to see the food bank services in action. This was the first time I have ever witnessed anyone receiving food or care. It was wonderful seeing people gain the resources they need to create a sustainable future and witness the genuine and accepting approach of the care workers at First Love.

I would like to say a massive thank you to the entire team at First Love for such an incredible experience. I am fortunate to live in a developed first world country all my life, with no first-hand experience of the shocking crises people face. I naively believed severe poverty in the UK was a thing of the past, and now only confined to Victorian literature. However, I couldn’t have been more wrong.

Poplar is a perfect example of modern poverty. Poverty is becoming more hidden and easy to ignore, the First Love Foundation is successfully changing this narrative. I have been extremely humbled and inspired by their tireless efforts to improve the lives of people living within their community and eradicate injustice. I hope the ethos and methods of First Love become a clear model for all; which will eventually achieve the goal of a society without foodbanks because people have been given helpful, unbiased and loving advice to help rebuild their lives.